Japan Vol.6 Alumni
Theme : My Future Dreams and My Actions

I am studying different cultures around the world. The overseas culture is totally different from Japan. The culture that I am interested in the most is “same-sex marriage” in foreign countries. Same-sex marriage is not accepted by a law in Japan, because of the religion and the main reason is that, accepting the same-sex marriage the country needs to change the laws. Those people who is one of the LGBTQ is having a hard time to say to a friend or a family. Because there are many people minding how the Japanese is seen from a person including discrimination and the prejudice. I think it is difficult to accept same-sex marriage in Japan. There is a thing called partnership system where Japan does not accept same-sex marriage by a low. This system recognizes the same sex couple as relations equivalent to marriage. Now, this system is enforced by more than 60 Japanese government. In the foreign countries, the countries where same-sex marriage is accepted unlike Japan. In my high school, the role of the uniform changed from this year. Japanese school has a strict rule of about school uniform. Girls must wear the skirt and boys must wear stand-up collared school uniform. But they revised the rule at my school, and both the uniforms for boy and girl changed in a system that they can wear a uniform of their favorite. I only know the word LGBTQ so far, and there was not a thing thinking about it deeply. But my thought changed after the change of the system of the uniform. By communicating and knowing the feelings of LGBTQ directly and was able to know what kind of difficulties they are going through. I was inspired by the work done by the team who changed the school rules. One of the members was under LGBT. For this work, not only their team members but also all the students at our school cooperated to this action. I felt that, to change a system or rule to better way, one’s strong feelings is important, but what’s most important is that those who support the one.

After knowing these facts, I make use of what I have experienced in a high school. I have learned the importance of understanding the feelings of the people. To widen my knowledge, I want to study abroad and associate with an overseas people directly and want to study why the LGBTQ system is accepted abroad. I do not know whether these experiences could lead to preserving the culture of my hometown, but I think that there would be new discovery by knowing the new cultures around the world and know different views and points. So, if COVID-19 calms down, I want to go to the country where same-sex marriage is accepted and want to directly touch this culture. I want to study it about the difference of an overseas person and the Japanese person in thought and sense of values. When noticing what oneself was not able to notice so far, in this way by knowing other culture, and the way they think. So, I want to learn other culture positivity.

However, it is impossible to know all the culture. Therefore, at first, I want to learn from Asian countries. And I want to study how the local people are working on with to preserve their local culture.

After learning the other culture, I want to reflect and study my own homes culture once more, and after becoming a teacher, I want to share my experiences and knowledges to the children in hometown. I want to think about what it is possible for to me so that what to do. The child notices a difference of the culture of the hometown and other culture to have you make a class to appear in the area to have a child come home and notice the good point of the hometown. And in return, I want to use what I have learned at university to oldness and want to become the person who can contribute to the hometown where I was born and raised all the time. And I want to look for a method to relate a hometown to foreign countries while repaying the hometown’s kindness. 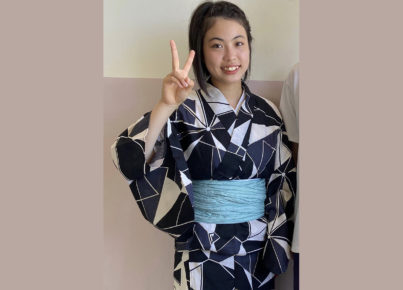